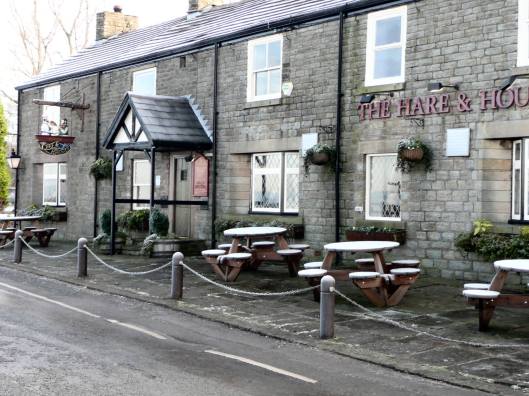 My love of writing, combined with an obsession for family history, led me to a new and unexplored Place of Learning last year. I signed up for a short course with the University of Tasmania, “Writing Family History”, which has opened up a whole new world to me, one which I’ve been edging around for years, that of Giving My Ancestors A Voice.

As any addict of tracing their family will tell you, during the hours of research into our beloved, yet unknown ancestors lives, our imaginations provide a running commentary of how they may have lived their day to day lives, how they felt during times of joy and heartbreak, and the words they no doubt would have spoken. We hear their accents, we feel their pain…

…we begin to love them. And when that final discovery of a death certificate is unearthed from amid the millions of archived records, we often shed tears, crying for the ancestor we have grown to love, that man or woman born in 1817, whom we have travelled throughout the journey of their worldly existence with…that written proof of their demise is a blow to our soul. 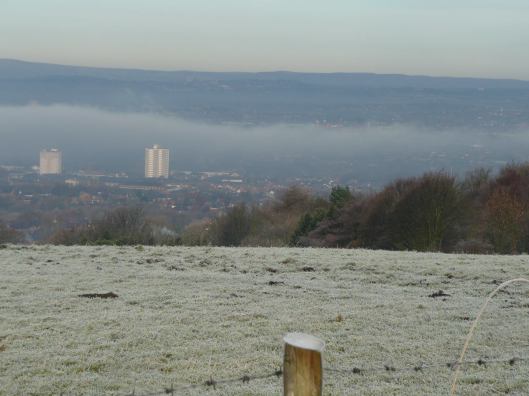 The view from Werneth Low, Photo by Keith Talbot.

For the first six weeks of the Writing Family History course, minus a break during Christmas, students were asked to write a short story of a moment in time, no more than two-hundred-and-fifty words in total, in which we would bring our ancestors to life.

At the conclusion of the six weeks, our final task allowed us to let our hair down and write to our heart’s content, bearing in mind the limit of our heart’s rampage be reined in when it reached one-thousand words.

As I sat at my computer one morning, poised to begin my first one-thousand-word draft in which my three times great-grandfather would play the lead role in my imagination, I found that the voice inside my head was that of my mother. Mum took over at the key-board, she had her own story to tell. And here it is ~

Her hands trembled, opening the envelope. She’d been waiting for the post daily, knowing her sister would send the newspaper clippings from England when they were published. Such excitement, and in her own family too!

She carefully removed the letter from the envelope, opened the pages, and neatly folded within a letter, she found the clippings she had been waiting for.

Annie settled herself in a chair in the kitchen, a freshly brewed cup of tea beside her. Opening the newspaper article, she recognised her brother immediately. He hadn’t changed that much in the eighteen years since she’d left England and sailed to Australia. The faces of loved ones are always remembered, no matter how many years pass by. 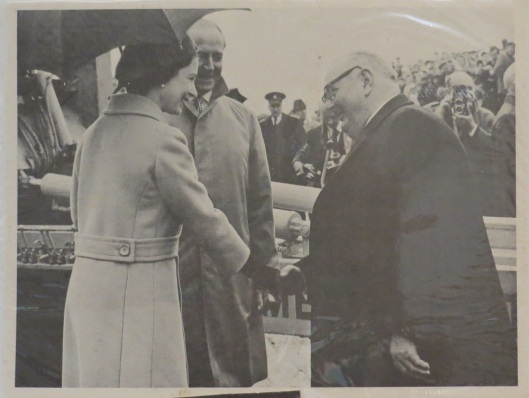 There was Walter, all smiles. Annie read the article with great anticipation. He’d donated three-quarters of an acre of land from the farm to plant a thirty-foot tall sycamore tree. There was a plaque unveiling too, by the Queen of England!

If only there had been someone at home to share this with, Annie thought to herself, as she looked at the photo of the Queen, smiling at Walter, holding his outstretched hand…good heavens, she held his right hand, the one he’d lost three fingers on! The Queen seemed not to have noticed, by the look of her relaxed smile. Annie chuckled as fond memories of her brother flooded her mind. Thank goodness the Queen always wore gloves, she probably hadn’t even noticed.

Annie smiled, remembering how Walter had always looked after her, like a second father. His son Billy was only three years younger than her, and even though Walter had his own home and family, he’d always made sure their larder at home was full of fresh food from the farm. She hadn’t even been aware of the Great Depression in the nineteen-thirties, thanks to Walter’s generosity.

Cow-heels for stew, eggs newly laid each day, fresh vegetables, creamy milk fresh from the cows, and, oh dear, those chickens she had to pluck! Annie shook her head, as she recalled those days of her childhood, trudging up the hill to Ash Tree Farm, rugged up against the cold. She must have been a sight to see, heading back home to Hyde Road, a lifeless chicken dangling from each hand, still adorned with feathers. She shuddered, wondering how she’d managed to clean and cook the dead birds for her family, without even so much as a grimace.

As she refilled her empty tea cup, Annie recalled her childhood, how she’d been expected to help out, especially when mam became ill. Children in those days were to be seen and not heard, do their chores and question nothing. In some ways a hard life, yet many fond memories lingered.

Her thoughts turned to her mother, as the ghosts of the past continued to invade her mind.  Walter had always treated her mam well, made sure she never went without. Walter wasn’t mam’s son, but oh she would have been so proud to know he’d been presented to the Queen! And their dad, well, she imagined he would’ve had to tell all his cronies at the pub all about his posh son if he’d lived to see the day.

Her thoughts returned to the present, and Annie read further into the article. The Queen had thanked Walter for the land, to which he’d replied, ‘It’s a pleasure.’ Imagine that, they’ve quoted my brother in the paper, Annie thought, bursting with pride, especially after she read that Walter was the uncrowned ‘King of Werneth Low’.

What a job it had been for Walter and Mary Ann after their publican’s licence came through, renovating the pub next to the farm when they first moved to The Low in 1928 with young Billy.

With no electricity and no tap water, they’d had to collect water from a nearby well. Never mind water though, all Walter needed was his beer and ‘his’ chair in the pub, and he was happy. Annie laughed as she remembered Walter’s saying, ‘More Drink, Less Talk.’

The sound of the front door opening jolted Annie back to the present again and the ghosts of the past disappeared.

‘Sam!’ she called, rushing to her husband to greet him as he walked through the front door. ‘Edie sent the newspaper clippings, you should see our Walter with the Queen! ‘Ere, I’ll boil the jug and make another cup of tea…come on then, sit down!’ she ordered. Finally, Annie had someone to show off her brother’s day of glory to.

I have the newspaper clippings Annie received from England, dated 1967, lovingly saved between the pages of a photo album, which I inherited. Annie, the story-teller, was my mother.

In another newspaper article, celebrating Walter’s fifty years in 1978 as publican of the ‘Hare and Hounds’, Walter was quoted as saying ‘…the highlight of his life was in 1967 when he was introduced to the Queen during her North West tour.’ 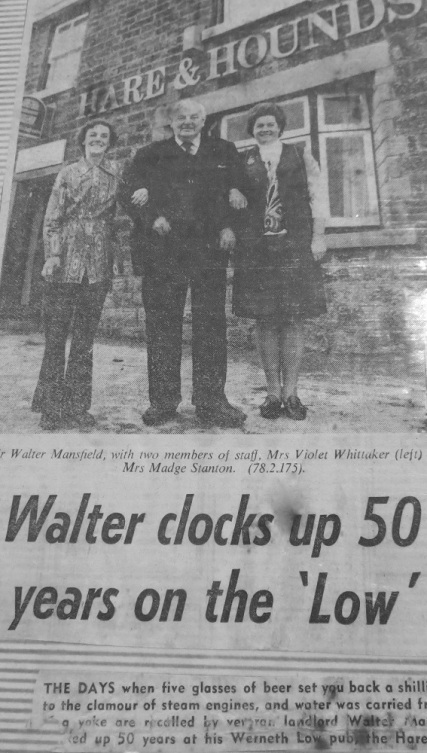 As a child, born to an English family after they immigrated to Australia, I became fascinated by the old stories of England. I looked forward to rainy days when mum and I would share cups of tea and I would curl up beside her and say, ‘Tell me stories about England, Mummy.’

‘I have no more stories left to tell you!’ she’d complain, and I would ask her to tell me the same ones again. Mum and I were opposites, she wanted to make new memories, whilst I longed for the old stories, the history.

Tirelessly she repeated them, humouring her strange daughter who was totally besotted by cold old England, the country Annie had wanted to leave, ‘to get warm’.

I write this story, one of many told to me by my mum, to pass on to future generations, to those strange little children yet to be born, who will also ask their parents to tell them the stories of the olden days. 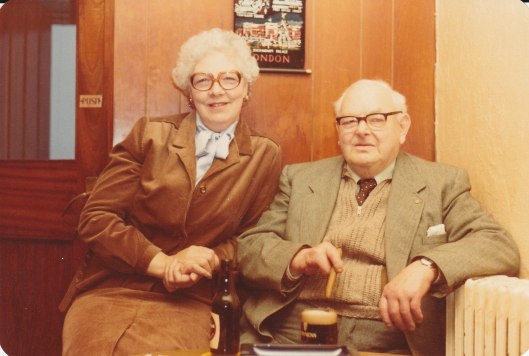 Uncle Walter in ‘his’ chair at the pub, with mum’s sister, Edie, who sent her the newspaper clippings.

The Family of Jo Mottershead by Joanne Mottershead Keevers is licensed under a Creative Commons Attribution-NonCommercial-NoDerivatives 4.0 International License.
Based on a work at jomottershead.com.